All the hard work of our friends and volunteers paid off June 2 with a parade of children wearing tiny rain boots.

Leigh and I took our donations up to Ikhaya Labantwana Montessori. (Check out what they wrote on their blog about us!) We took a ton of stuff to them. It was a long journey: 20 hours of flying, 13 hours of driving and then a final hike up the hill from our hostel to the school. Let me just say that the most daunting part was the hill. It was like climbing Mount Everest. We carried all the stuff plus Mia, our 8-month-old daughter. It was a couple hundred yards and took a couple hundred hours. When we walked through the gate it was so exciting.

All the little ones were running around outside after having finished their snacks. They were screaming, rolling and playing all over the place. Oh, recess. It's universal. Dawn, the teacher, greeted us and we moved everything into the school, which is a rondavel built out of mud bricks and a reed roof. It looks small outside but it's a wonder inside. Everything is immaculately clean and organized, and Dawn has worked very hard to create/find/buy all kinds of learning tools. It's really impressive.

We discussed our donation with Dawn. The toothbrushes, toothpaste and vitamins would be kept at the school so they wouldn't be lost or taken by someone else. The students would brush their teeth and take their vitamins at school and would take vitamins home for the weekends. The school would keep the books, puzzle and a soccer ball. Each child would receive a pair of rain boots and extras would be saved for children in the future. The sports equipment we bought - a dozen soccer balls, three cricket sets and a few basketballs and rugby balls - would go to a local sports group that was starting youth sports leagues.

The students came indoors and it was activity time. Each of them had to pick something to do and work on it for a bit. There were only nine students at school that day - the others were sick, unfortunately. But for that many 3-, 4- and 5-year-olds in one hut, the class was surprisingly calm. They all picked up activities, which were carefully separated onto trays, and went to work. They did all the regular things you'd imagine would be going on at a preschool, like practicing numbers. But they also did real-life practical skills, like using a spoon to move seeds from one bowl to another. It was so neat to watch tiny hands practice using a spoon or a sponge or a rolling pin for play-dough. They painted and counted and organized blocks. They were content and diligent. It was a sight to see.

Dawn worked with one little girl who was working with a stack of numbered squares. She'd ask the girl to find the eight, and the girl would point to the eight, with a wide smile and wide eyes. She was so proud to pick out the number on her own. Dawn asked her to find seven. The children sitting closest stopped their activities, held up seven fingers and smiled like they'd won the lotto. "There are seven!" they sang. Dawn explained that they have a song about the days of the week and it's one of the kids' favorites. She had to calm everybody down with the promise that they'd get to sing the song at the end of the afternoon. I couldn't wait to hear it!

After they finished activity time, it was circle time. They walked around the room on a piece of tape in the shape of a circle. Everyone quieted down and prepared for the end of the day. Dawn told them to stop and they could sit where they stood. She told one little girl not to push another. "But she's too close," the girl explained. "Then say, 'Could you move, please? You're in my bubble,'" Dawn said. The tiny girl faced her friend: "Could you move, please? You're in my bubble." The children sat and talked about what day, month and year it was. Then they sang the days of the week song. Actually, it was more of shouting than singing. It was clearly the children's favorite; they were awfully excited.

After some more songs and a book, it was time to hand out the rain boots. Each child could have a pair to keep. Dawn asked us if we'd like to shake the children's hands or give them hugs or do something else. We said we could hand the boots out however she liked. "I've never done anything like this before," Dawn said. "Neither have we," we said. So we decided that each child could get a pair of boots and would give me a hug - something that not all children get as often as they should.

One at a time the children came up to me as I sat in one of the child-sized chairs in the hut. I handed over a pair of black rain boots to stoic little faces. Some hugged me, others shied away. A couple shook my hand. It was pretty formal but still really nice. They were so sweet. After they got their boots, the children took them to Dawn, who wrote their names on the inside. I looked over at her table and the children were ecstatic. When they picked up the boots from me, they didn't really smile. They whispered thank you. But when they were around an adult they knew, they were beside themselves with joy. It was awesome.

After Dawn wrote their names on the shoes, they all rushed back to the circle and put their boots on. They giggled and talked in Xhosa with distinctive clicks.

It was the end of their school day, and Dawn gave them directions on how to leave the hut. Today they'd tiptoe up to the doorway and then sprint out onto the grounds. This was immensely fun, and they were already smiling because of their shoes. As soon as they hit the doorway they screamed and ran wild. As the last of the children ran out of the school, they all began to stomp in their new boots. Stomping is especially fun in boots. Then they all got into a parade and stomped around one of the garden beds. They swung their arms and smiled. It was absolutely wonderful.

While hiking up that hill, I was wondering if this even mattered. We came from so far just to deliver some rain boots. Was this worth the million-mile journey? Yes. Absolutely. No one else was going to give these kids boots, and they needed them. It was the best feeling in the world.

Thank you so much to our friends, family, donors and especially our board - Traci Dodderer Bentley, Chad Previch, Michael Kimball, Susanne soon-to-be Kimball and Ryan Reaves. Everyone's generosity and hard work paid off in ways we can't understand. Thank you, thank you, thank you.

We donated soccer balls, rugby balls, basketball balls and cricket sets to the children of Coastal Light Ministries while we were in Coffee Bay. It is a organization designed to teach cooperation, respect and leadership to boys ages 12 to 16. The U.S.-based nonprofit was founded this year by Charles and Robin Gwatkin of North Carolina. The club has four rules:

We unfortuantely didn't have the opportunity to meet Charlie, but he shared these kind words about what Vilakazi's donation meant to the organization:

"Thank you for the donations. They have been used in our sport clubs we do with the Xhosa youth. I cannot thank you enough for the generous gifts! ...  I cannot tell you enough how great your timing was. We were down to our last soccer ball when Dawn (of Ikhaya Labantwana Montessori) called me to tell me about your equipment. We currently have about 40 boys in (the town of) Matokozini, 30 in Matgheni and some in Coffee Bay. When you see the looks on some of the boys faces when they realize they can be part of an organized sport team with real quality equipment, it makes it all worth it!!!" 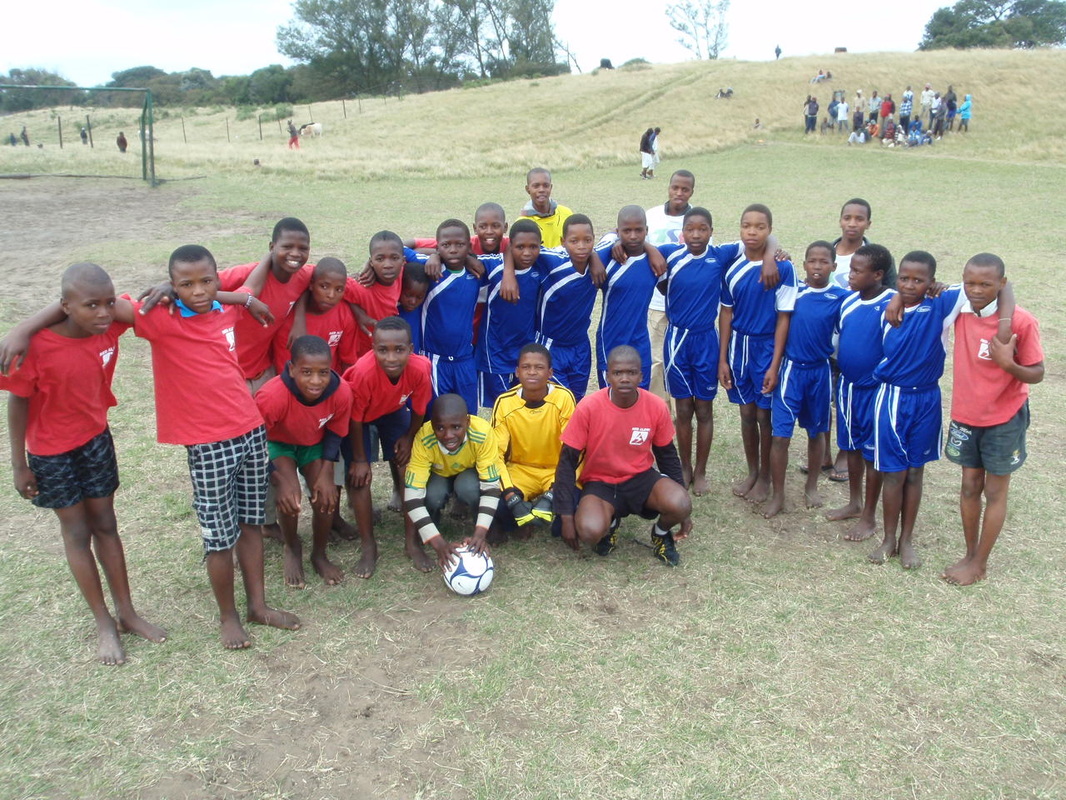